“Latrese Bush is a singer extraordinaire. She embodies a caliber of vocal range, control, style, and quality that is rarely seen in one person. Along with depth of character and integrity befitting a Christian woman, her vocal and personal characteristics are destined to take her to the highest level of productivity and potential the Lord has prepared her to reach. I look forward to a meteoric rise …” — Legendary Grammy Award Winner, Gloria Gaynor 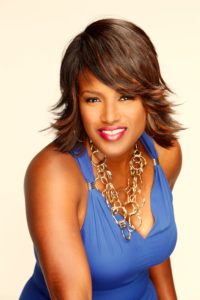 What do Tony and two time Grammy Award winner Jennifer Holliday, Grammy Award winner Gloria Gaynor, Jazz Icon Phil Perry, R&B star Bobby V, and Pop Phenom Justin Bieber all have in common? They’ve been fortunate to have worked with soulful songstress Latrese Bush. Her melodic vocal range has supported these and many other musical greats! When she’s not traveling the world with Gloria Gaynor performing the iconic hit “I Will Survive”, Latrese can be found singing at various venues, songwriting and making music.

Latrese teamed up with Grammy Nominated songwriter Alvin Garrett to co-write “Walk It Out” by gospel group Virtue.  She recently lent her mezzo-soprano to the legendary funk group The BarKays for their soulful R&B ballad “Up and Down”.  She can also be heard as a featured vocalist on jazz keyboardists Justin Gilbert’s “Big Shine” from his debut album release “Aligned”, and Bob Baldwin’s single “Turn The Club Up” from his album “Twenty” , and trumpeter Joey Sommerville’s albums “Ride To This”, “Like You Mean It” and “The Get Down Club”.  Her latest releases, “Because of You,” featuring soul star, Noel Gourdin, and “Love I Can Sing About” written by Grammy Nominated Alvin Garrett and R&B star Ruben Studdard has topped the UK Soul Chart and are sure to be anthems for lovers across the globe.

“A songwriter and southern belle with a professional resume that most newbies could only dream of, Latrese Bush has cultivated her performance skills and sparkling soprano on stages around the world.” — SoulTracks

“In the midst of this fast paced human experience, real authentic heart connections can sometimes be lost through instant messages. This is the kind of song that takes you back to love expressed through a letter sent by mail. This is a feel-good theme song for lovers.” — Singersroom

“Following up on the messages originally expressed in her debut EP, ‘The Best’, Latrese conveys love through a melodic conversation backed by a gorgeous production. She says that ‘Love will never fail & I will always sing about its power'”. — VannDigital.com

“You’re very talented! Listening to your song ‘Because Of You’ reminds me of Denise Williams! Keep doing great work!” — Frank Ski

“I was wowed the first time I heard Latrese sing. I knew she had the IT factor; that intangible STAR quality only a select few naturally have. She has an energy and a spirit that is bright and contagious. When we needed singers for Justin’s promo tour, Latrese was my first choice. Once you hear her sing – you will love her; once you see her perform – you won’t forget her.” — Tom Marzullo, Tour Director, Justin Bieber

“Latrese stepped forward to sing with [Gloria] Gaynor during a Donna Summer medley, she had the audience roaring in approval as she hit several high notes.”  — Laala Kashef Alghata, Gulf Daily New, Bahrain