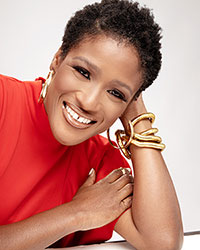 What do Tony and two time Grammy Award winner Jennifer Holliday, Grammy Award winner Gloria Gaynor, Jazz Icon Phil Perry, R&B star Bobby V, and Pop Phenom Justin Bieber all have in common? They’ve been fortunate to have worked with soulful songstress Latrese Bush. Her melodic vocal range has supported these and many other musical greats! When she’s not traveling the world with Gloria Gaynor performing the iconic hit “I Will Survive”, Latrese can be found singing at various venues, songwriting and making music.

Latrese teamed up with Grammy Nominated songwriter Alvin Garrett to co-write “Walk It Out” by gospel group Virtue.  She recently lent her mezzo-soprano to the legendary funk group The BarKays for their soulful R&B ballad “Up and Down”.  She can also be heard as a featured vocalist on jazz keyboardists Justin Gilbert’s “Big Shine” from his debut album release “Aligned”, and Bob Baldwin’s single “Turn The Club Up” from his album “Twenty” , and trumpeter Joey Sommerville’s albums “Ride To This”, “Like You Mean It” and “The Get Down Club”.  Her latest releases, “Because of You,” featuring soul star, Noel Gourdin, and “Love I Can Sing About” written by Grammy Nominated Alvin Garrett and R&B star Ruben Studdard has topped the UK Soul Chart and are sure to be anthems for lovers across the globe. Download One Sheet >>